In light of recent ammo shortages, many gun lovers have been stockpiling extra ammunition. But how long do bullets last? Does ammo expire after a while of being stored away for a rainy day?

Over time, lots of things can expire or go bad. We all probably have that one can of soup in the back of our pantry that is a few years old. If all of these other things go bad, does ammo go bad too?Yes, it absolutely can if you don’t store it properly. But don’t run out and shoot up your stash just yet. There are a few things you can do to increase the shelf life of ammo.

Depending on your climate, where you store it, and how warm or cold your house is can all impact how long bullets are good for. We’ll go over all of this in detail below.

How Quickly does Ammo Go Bad?

So, how long can you store ammunition before it goes bad? It all depends on whether it’s stored properly. Things like temperature and humidity can affect how long it lasts.

But how long is ammo good for? Most manufacturers put an expiration date of 10 years on their rounds, though the truth is that most ammunition will last longer than that, Jeff Johnston wrote in an NRA Family article.

“Fact is, all modern ammo will last more than ten years if it’s been stored reasonably well,” he wrote. “Ammo companies push a conservative message, likely because they don’t want the liability if it fails to fire.”

Really the only way that modern bullets can go bad is if they get wet or are exposed to a lot of humidity, according to USA Carry. Even then, it usually takes repeated exposure to water for the moisture to make its way through their well-sealed primer pockets.

So, the answer to how long do bullets last is this: As long as you take care to properly store your ammunition, the odds are low that your ammo will expire. Still, it’s important to check your rounds for signs of corrosion before use (more on how to tell if ammo is bad later on). It’s also recommended to shoot your oldest ammunition up first, that way, your arsenal stays fresh.

How Should You Store Ammo? 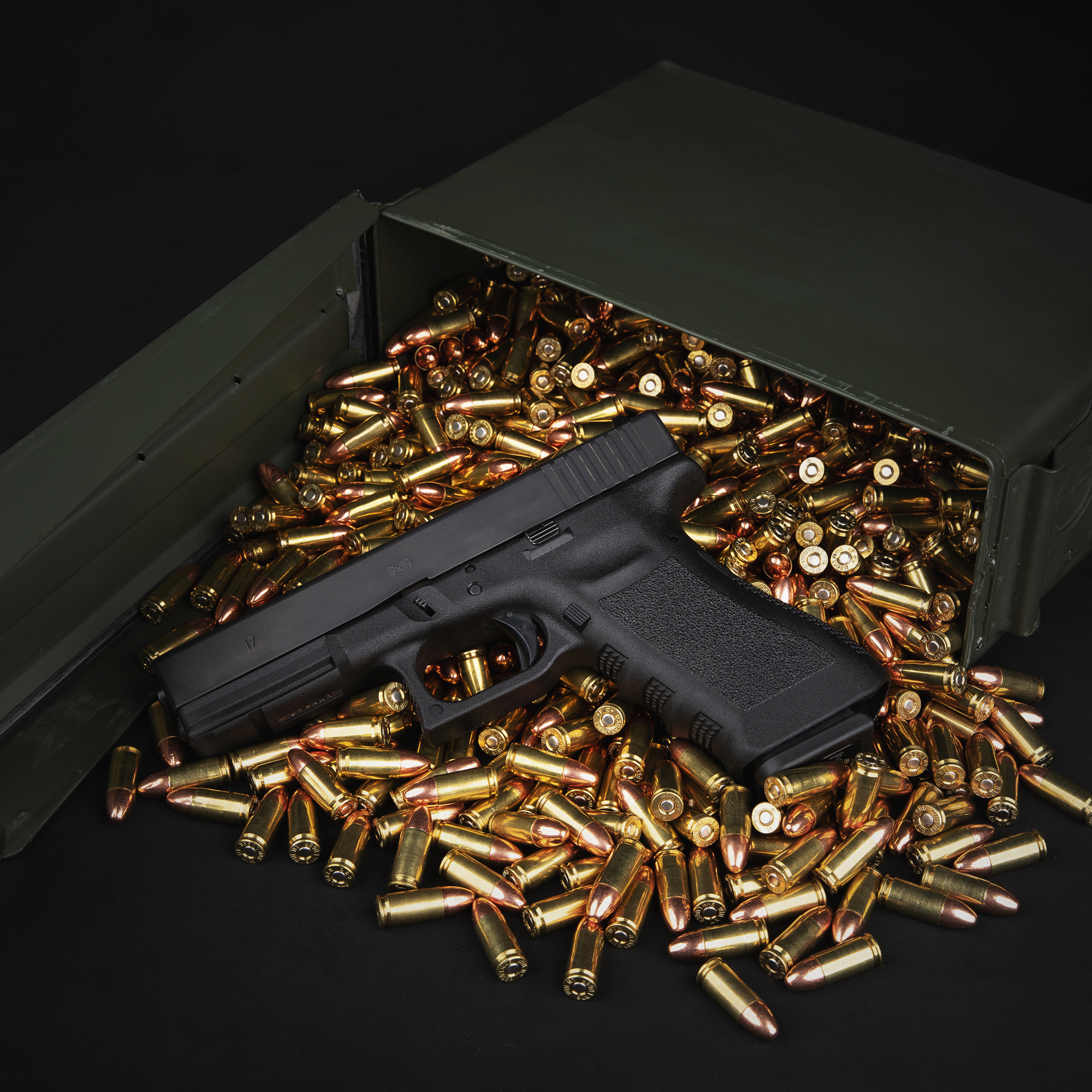 If you want to prolong the life of your ammunition, we have a few ammo storage ideas. One way to store your extra rounds is in a magazine. Some people believe that storing your rounds in a magazine will damage the springs but in reality, that is a myth. The springs on your magazine will be just as effective with or without bullets stored in them.

For long term ammo storage, you want to keep it somewhere dry with low humidity and a reasonable temperature. This could be in a closet or near your safe, and even a drawer will suffice. The bathroom is probably not the best place because of the moisture created by the shower.

If you don’t want to keep your extra ammunition in a magazine, another option is an ammo can. These containers can keep your bullets sealed and protected. Additionally, if you place silica gel packets in the can with your ammo, they can help reduce any moisture that may be inside.

How to Tell if Ammo is Bad 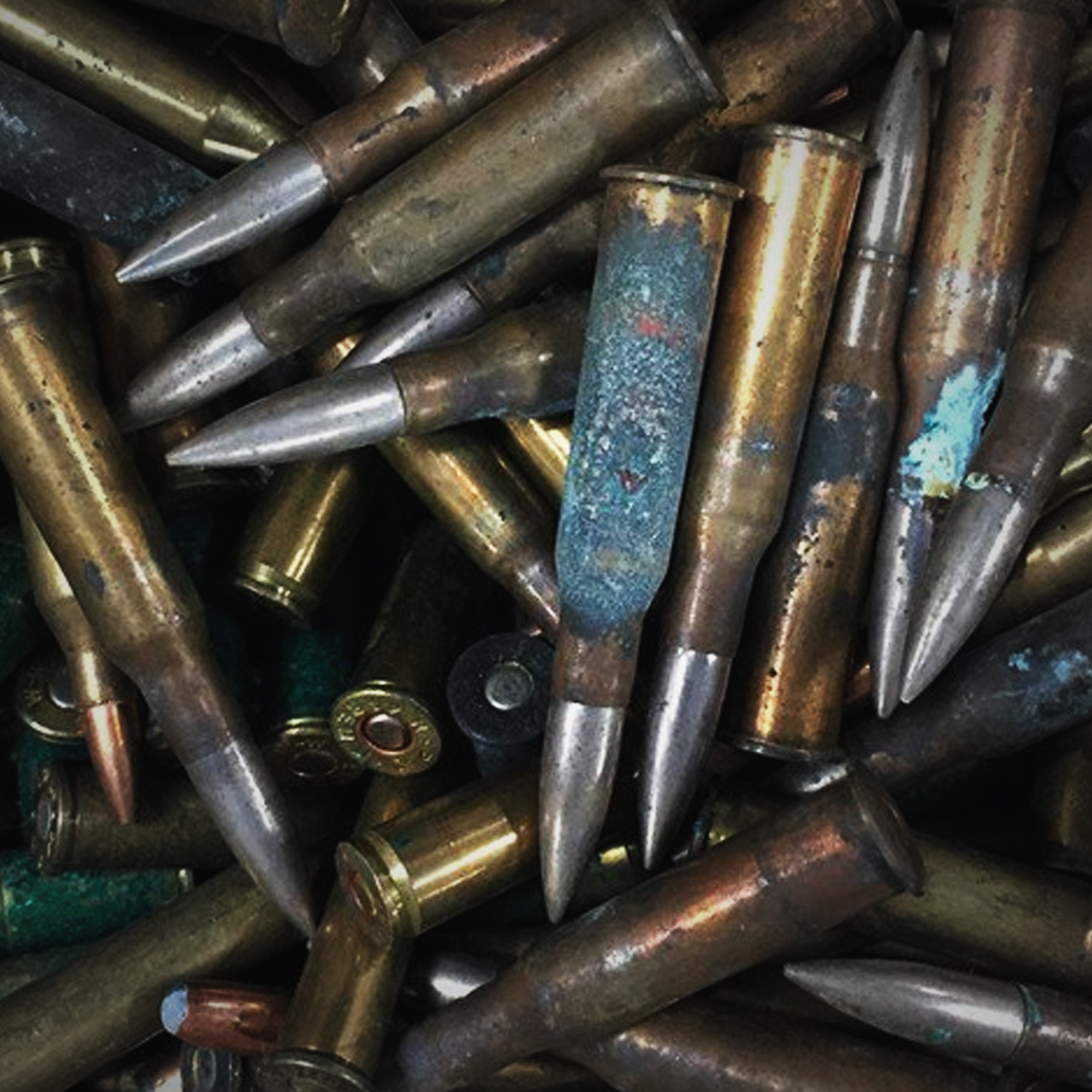 Maybe you already have some ammo tucked away for a rainy day and want to know how to tell if it is bad. Well, there are a few indicators that your ammunition is no longer useable.

First, your ammo is bad if it is tarnished beyond recognition. It's natural for bullets to tarnish over time so if you see a little discoloration, don’t freak out just yet. If your rounds are severely tarnished where you can see the corrosion on the bullet, it is bad.

Another tell-tale sign that your ammunition is bad is if the gunpowder smells. If you were to remove the bullet from the casing, you would be able to smell the gunpowder. When gun powder goes bad it has a very strong sulfur-like smell. The last way to know your ammo is bad is if it’s damaged. For example, if the bullet or casing is dented.

Properly storing your bullets can reduce the chance of your ammunition going bad or becoming damaged. But what happens if your ammo goes bad? Can you still use it?

Can You Still Use Bad Ammo? 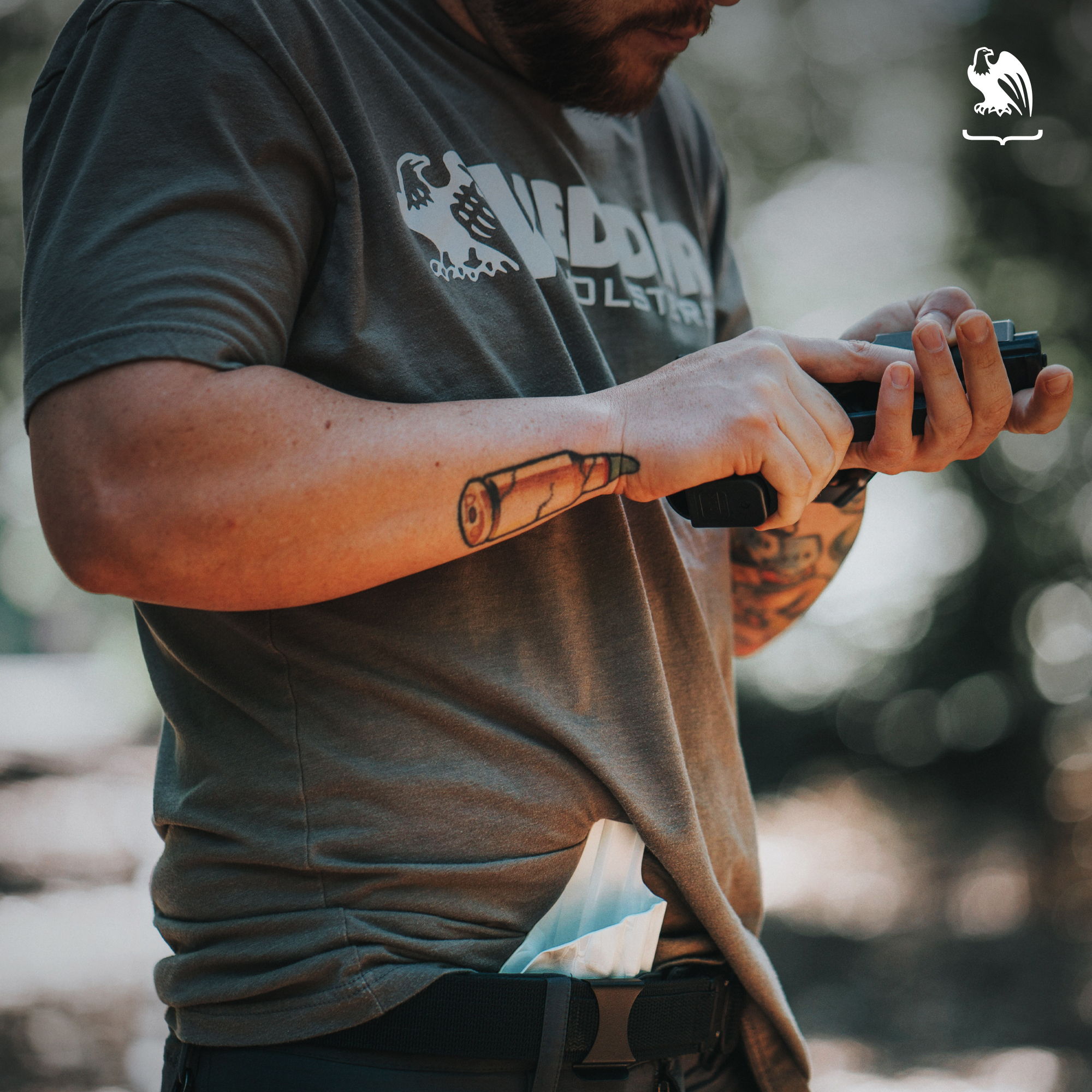 Do you eat your expired cheese from the fridge after it has a few green spots on it? Most likely, you don’t because it could make you sick. Well, you shouldn’t use bad ammo because it can damage your gun.

When you feed bad ammunition into the barrel of your gun, not only does it have a chance of misfiring, it also may not have enough momentum to exit the barrel. This can cause more issues than just not firing. If a bullet is trapped in the barrel, you will have to safely remove it or have it removed before you can fire another bullet.

Having bad ammo could be the difference between life and death. If you are in a situation where you need to use your gun to protect yourself, your family, or someone else, and your rounds are bad, you may not be able to fire a shot in time. So, it is better safe than sorry when it comes to bad ammo.

How to Dispose of Ammunition That’s Gone Bad

You now know how to tell if ammo is bad, how to properly store your ammunition, and whether you can still use bullets that have gone bad. If you have bad ammo and can’t use it, you’ll need to properly dispose of it.

Improperly disposing of ammo can be dangerous as there’s a risk that something could ignite the primer. Not only that, but some ammunition contains lead, which isn’t something you want to just throw away.

If you’re wondering how to dispose of ammunition safely, we have a few ideas. One way to do this is to take it to your local gun store or range.

A local range has the ability to safely dispose of ammo and will typically do this free of charge. If you live near a waste facility, some have a hazardous waste dropoff that may accept bullets. The last option we will mention is calling your local law enforcement. Some departments will accept the bad ammo and properly dispose of it for you.

So, before you just throw your old bullets in the garbage, use one of these disposal methods to safely get rid of any bullets you don’t want or can’t use anymore.

How Much Ammo Do You Need? 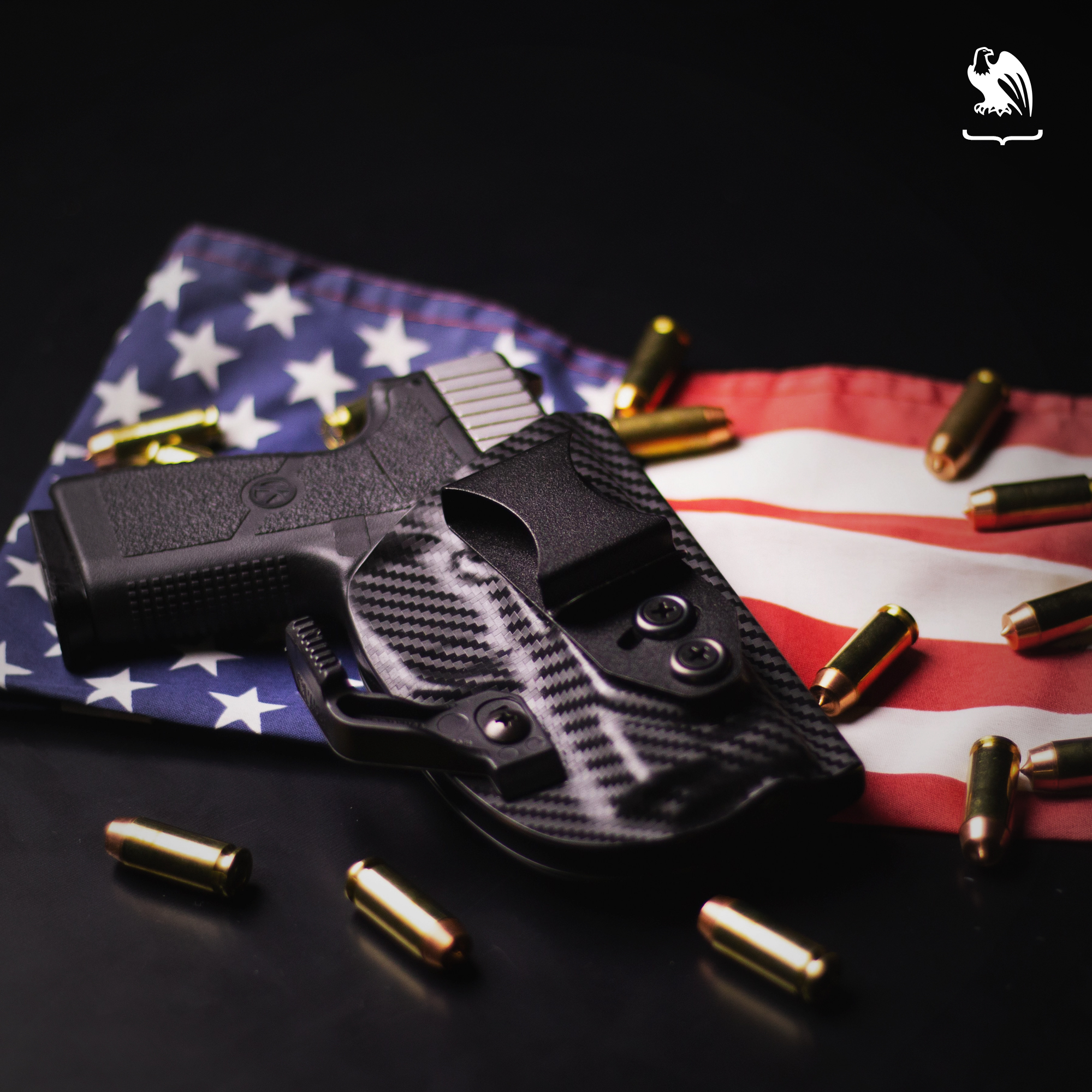 The ever daunting question of how much ammo do you actually need. Some people may tell you to have a stockpile, while others may say you should have just enough for each of your guns.

Ultimately, this is a personal preference. At a minimum, you will most likely want enough to have each of your self-defense weapons fully loaded. Some of our customers prefer to have enough ammunition for an additional magazine for each of their guns. You may also want additional rounds for using at the range when practicing.

We recommend cycling a magazine or two of your chosen ammo through your gun initially just to make sure there aren't any problems.

The answer to the question of does ammo go bad is yes, it can. If it is extremely tarnished beyond recognition, damaged, or the gunpowder smells, your ammunition has gone bad, and you will need to safely dispose of it. Using bad bullets can damage your gun, and you can’t accurately predict how the bullet will behave.

To safely dispose of your old ammo, take it to a gun store, range, waste facility, or to your local law enforcement. At any given time, how much ammunition you have is up to you. But you will most likely want enough to have each gun you own fully loaded and some additional rounds for practice.

If you are looking for belts or holsters, we recommend visiting our Vedder Holsters website for all of our belt and holster options and for more information to help you choose the carry system that works best for you. Like everything we sell, our gun belts are covered by a Lifetime Warranty and 30-day money-back guarantee.