When it comes to knowing the difference between “clip” and “magazine,” you probably fall into one of two categories: those who think they’re the same thing and those who feel their blood boil when the terms are misused.

If you’re still confused, keep scrolling to learn more about what the difference is and why it’s an important distinction.

*Warning! Understanding the difference between a clip and a magazine may cause an adverse reaction to hearing the terms misused by others. Symptoms range from mild irritation to blinding rage. Please proceed with caution.

What’s The Difference Between “Clip” And “Magazine?”

While you’ve probably heard the terms “clip” and “magazine” used interchangeably, they’re actually completely different. More often than not, people use the word “clip” when they’re referring to a magazine.

So, is it a clip? A magazine? Some sort of magazine clip thingamajig? What’s the difference anyway?

A clip is a metal device used to load ammunition into a magazine. They’re usually shaped to hold cartridges in a row and are pushed into a magazine by hand to load it. A magazine, in turn, is a spring loaded device or holding area on a firearm that feeds rounds into the chamber of the gun during use.

What Is A Magazine?

“Clips are what civvies use in their hair. This is called a magazine.” 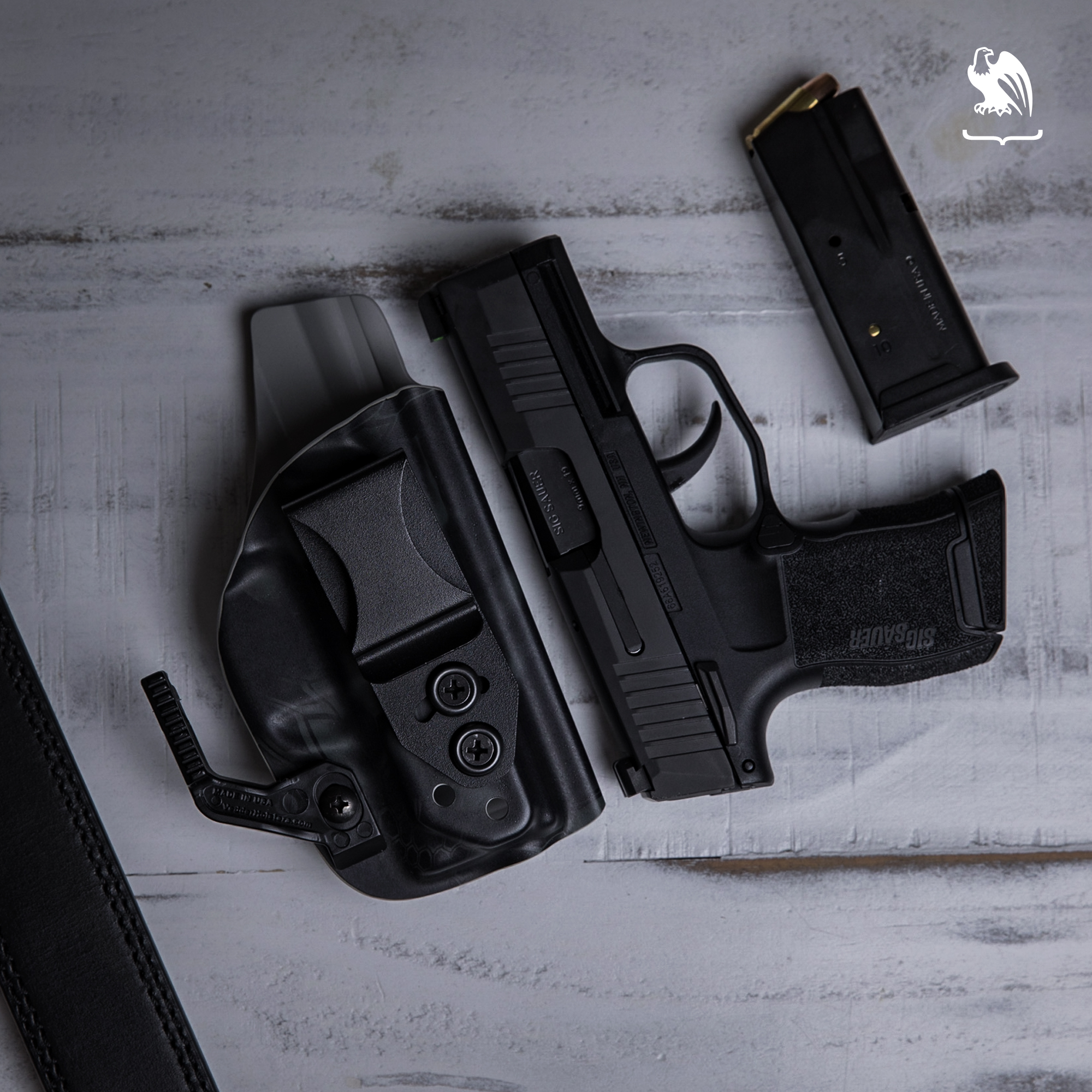 A magazine is a device or chamber that holds bullets and feeds them into the chamber of a firearm. All guns, with the exception of revolvers and single-shot firearms, have a magazine.

The magazine on guns like pistols and AR-15s is typically removable, while the magazines on shotguns and many bolt action rifles do not come out and are loaded from within the weapon. 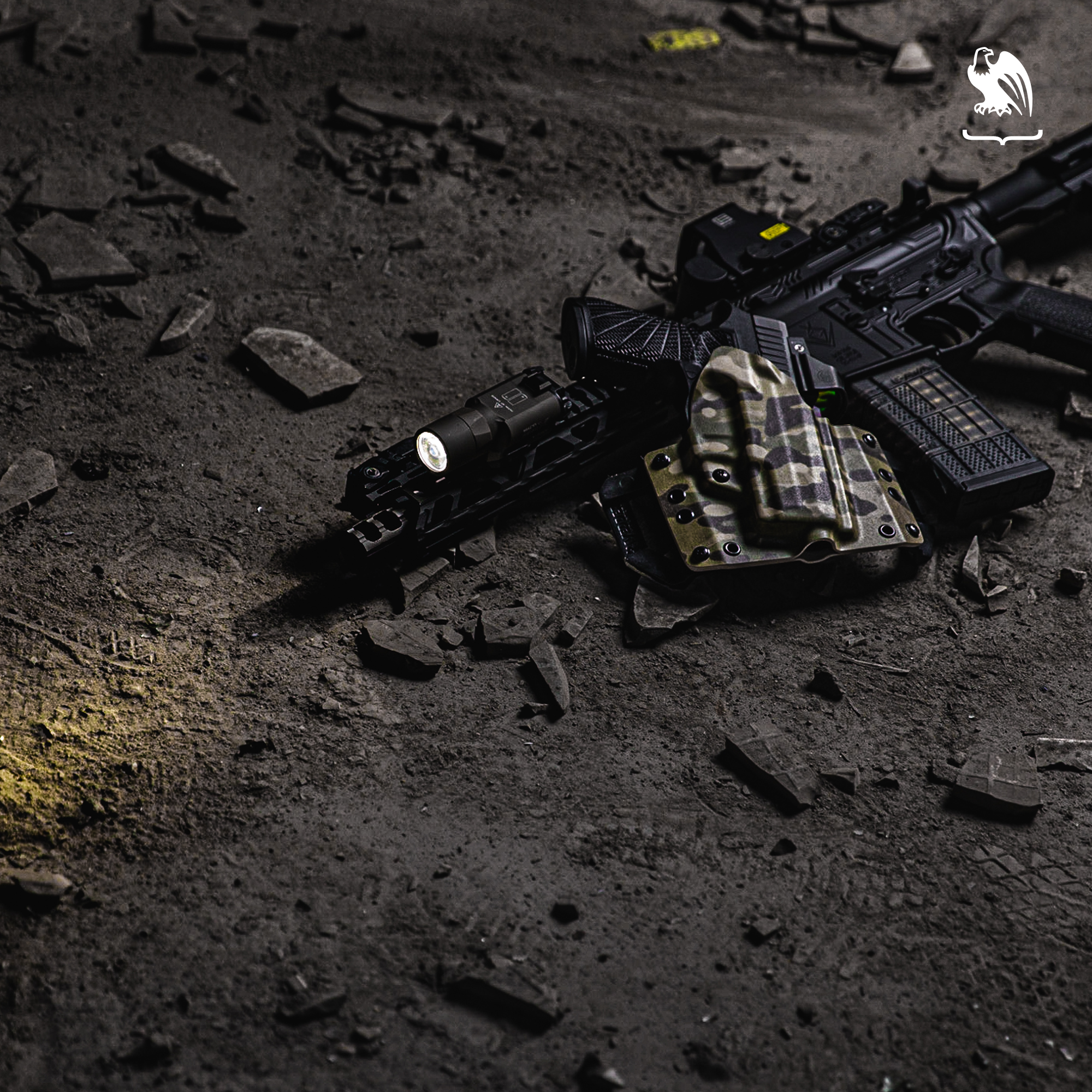 The most common type of magazine is the box magazine, which was named for its, you guessed it, box-like qualities. Most modern semi-automatic rifles and pistols come equipped with this kind of magazine.

Most modern handguns and semi-automatic rifles have a detachable magazine. These magazines must be removed from the firearm to be loaded and spare mags can easily be stored or carried.

Detachable magazines are usually loaded by hand or sometimes with a clip. These magazines started to grow increasingly popular in the 20th century as semi-automatic pistols and rifles became more common.

Detachable magazines make reloading significantly faster and easier. They also make it easier to transport or carry ammo on your person as opposed to storing it in a box or paper bag or having loose ammo jingle around in your pant pockets.

An internal box magazine is one that cannot be removed from the firearm (without disassembling it, of course). It stores ammo and feeds rounds into the chamber just like a detachable magazine, except it cannot be removed and you can’t keep an extra one loaded and handy nearby.

Most shotguns and bolt action rifles have internal magazines, which require the user to load rounds directly into the gun one at a time. This process can be sped up by using a clip, which we’ll get to later on.

A tubular magazine is located within a firearm like an internal box magazine but is different because of how it operates. With a tubular magazine, rounds are fed into a cylinder-shaped magazine one at a time then loaded into the chamber by the gun’s lever, pump action, or charging handle.

Tubular magazines are sometimes seen on .22 rifles and are commonly seen on pump and semi-automatic shotguns and most lever-action rifles.

What Is A Clip?

A clip is a small metal device that stores multiple rounds of ammunition. They allow you to load a magazine faster by inserting multiple bullets at once rather than loading them by hand one at a time.

Clips are most commonly used in older bolt action rifles with internal magazines but can also load detachable magazines for guns like the AR-15. 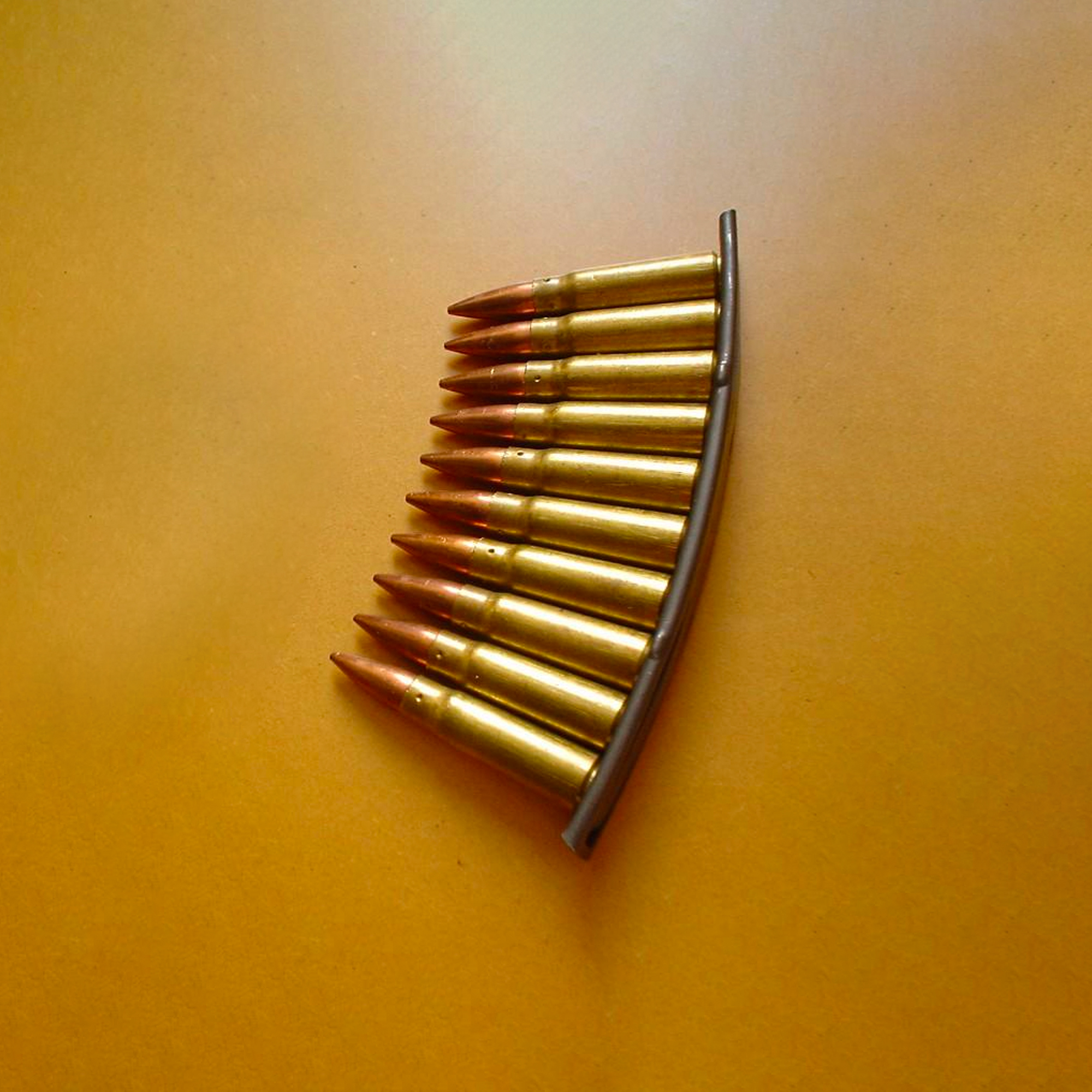 The most common type of clip is the stripper clip. These clips are most often used to load internal box magazines but can be used on detachable box magazines as well.

A stripper clip works by holding ammunition to a strip of metal. The clip is then inserted into the magazine of the weapon and pushed down in one swift motion. Then the clip is removed from the magazine, and your gun is ready to go.

The stripper clip makes loading a magazine much faster and easier than loading each round one at a time, making them a useful tool for soldiers who needed to reload quickly. 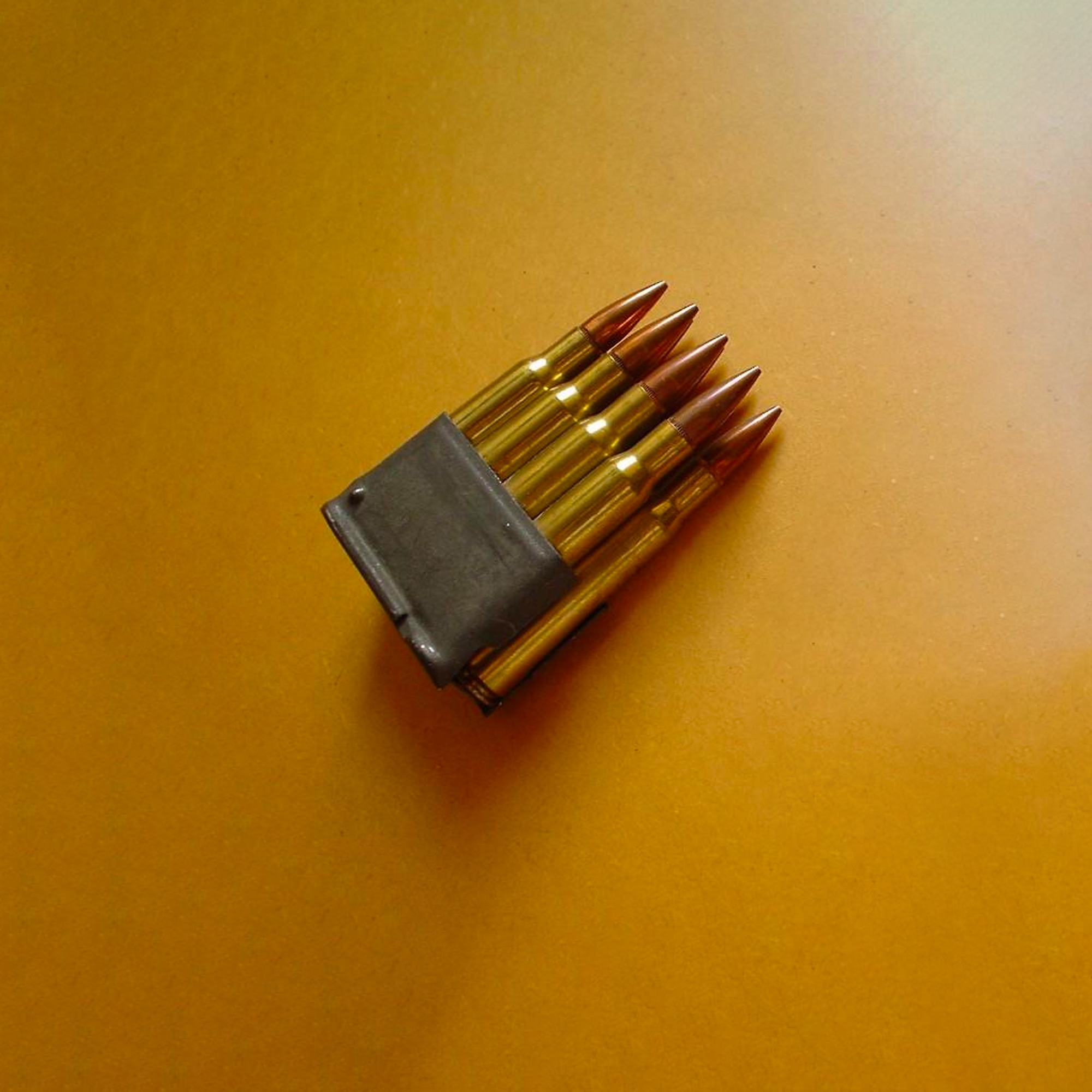 An en bloc clip works similarly to a stripper clip in that it is inserted into a magazine to load multiple rounds at a time. However, the en bloc clip can only be used to load an internal magazine because, unlike the stripper clip, it is not removed from the gun after loading.

Because the en bloc clip stays in the gun after it’s loaded, a distinct ping can be heard when the gun has fired its last shot and the clip is ejected from the rifle.

The en bloc clip is not commonly used today as any modern rifle that uses a clip would use a stripper clip instead.

A moon clip is a circular device with spaces for bullets to be snapped into, somewhat resembling a gear. The rounds are then slid into the chamber all at once. Like the en bloc clip, the clip stays in the gun while in use.

While these clips make it easier to load a revolver, it can be somewhat difficult to remove emptied cartridges once you’re done.

It’s hard to pinpoint exactly when and why people started using “clip” and “magazine” interchangeably. It could be because of how frequently the terms are misused in movies, TV shows, video games, or even media and politicians who get them mixed up.

But perhaps the most widely accepted cause for the confusion is the M1 Garand, a rifle that was first heavily used by soldiers during World War II. At the time, using a clip was the fastest way to reload bolt action rifles like the M1 Garand, so most soldiers during that era became used to loading the firearm’s internal magazine with an en bloc clip.

However, when the war was over, many veterans went home and kept calling anything and everything that loads ammunition into a firearm a “clip.” It is believed that from there, the misnomer became widely used, and the term “clip” has been mistakenly used to describe a detachable magazine ever since.

Why Does It Matter?

So what’s the big deal? At the end of the day, both terms get the point across, and both load ammo into a gun, right?

Well, the truth is a bit more complicated than that.

Besides the fact that it annoys your fellow gun enthusiasts, there are a few reasons using improper terminology can be problematic. While yes, people will generally understand what you mean if you call a magazine a clip, at the end of the day they are entirely different things. If you want to be taken seriously within the gun community, it’s important to know what these terms mean and use them correctly.

It’s arguably even more important to use proper terms when talking with those outside the gun community as it shows others that you’ve taken the time to educate yourself about guns, which helps you sound more credible.

Besides, if you yell “throw me a clip” when you really need a magazine, one of these days someone might actually toss you a clip. And that would just be awkward.

How To Remember The Difference Between A Clip And A Magazine

Still having trouble remembering which is which? Here are a few tricks for how to tell the two apart.

The simplest way to tell the difference between a magazine and a clip is to remember that magazines have springs and clips don’t (easy, right?).

If you’re still confused, think of an actual paper magazine like Guns & Ammo or National Enquirer if that’s your thing (we don’t judge). When you think of a news or magazine “clip,” you think of a small snippet of an article. And a magazine is filled with what? That’s right, clips.

At the end of the day, keep in mind that all guns (besides revolvers and single-shot firearms) have magazines, but not all guns have clips. And most modern-day firearms don’t use clips at all. So when in doubt, using the term “magazine” is more likely to be accurate than “clip.”

Guns That Use Clips

Believe it or not, there aren’t actually many modern-day firearms that use clips.

Plenty of older rifles such as the M1 Garand, the SKS, and the M1903 Springfield used clips. And while you can still get your hands on many of these weapons today, they’re not commonly used anymore.

An AR-15 is an example of a modern gun that you can reload the magazine using a stripper clip, though it’s not necessary.

And, of course, revolvers do not have magazines. There are clips for revolvers, however, so they would fall under the category of guns that use clips.

And remember, when in doubt, it’s probably a magazine.

If you are looking for belts or holsters, check out some of our Vedder Holsters products here. Like everything we sell, our holsters and gun belts are covered by a Lifetime Warranty and a 30-day money-back guarantee.

Looking for items beyond holsters and belts? Check out our Resources Page for popular product links like lights, laser, first aid, maintenance, and more.